Which ocean did we actually cross? – A Debriefing

Thank you so much to you, our readers and followers, for your congratulations for our successful transatlantic passage, your best and warm wishes for my birthday and the questions/comments you posted. Angela and I are very much touched by the high level of attention you have been giving us and the very personal comments you have sent over various communication channels.

As soon as we had posted the last article where we reported on our tough passage with heavy waves and winds right from the back, we got a call from Guatemala from our friends Sabine and Jan, who crossed the Atlantic at the same time with same route last year also with a 50 feet monohull. “Did you really cross the same ocean as we did last year?” asked Sabine. “Difficult to imagine, as we experienced a smooth Atlantic with rather little winds and very calm waves. Absolutely relaxing.” Strange. For us it was really challenging.

After we had arrived, we waited for the remaining 41 boats to arrive. The last yacht came over 4 days later. We had time for countless rum punches with many reports from the other crews. The more rum punches we had, the more facts and emotions became obvious from their side. The key topic of the monohull crews was the 24h rolling and partially little winds on the north route resulting in even more intensive movements of the ships. Broken materials as a consequence was annoying and quite costly to repair in St. Lucia. Interestingly the smaller and lighter the boats were (around 37 feet), the less issues they encountered in the waves. But as they are not so fast than the bigger boats it took them more days to arrive. Of course, the catamarans struggled much less with the waves and the rolling effect as they very stable on their two hulls, but they suffered from the waves slamming on the hull making it difficult to sleep. Hence nights were perceived even much longer. Darkness of 12 hours was a bit of a burden for everybody. The frequent squalls at night did not make it more fun. Nobody was amused with the sudden strong winds and heavy extremely cold rain. (No showering in warm rain, as reported all over. Bulls….)

Always some people on board – shoes stay on the pontoon 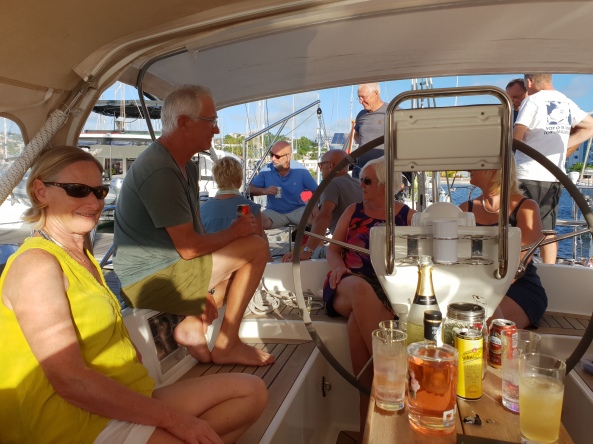 We relax, discuss and drink rum punches and many other things

Naming ceremony of our new dingy Odysseus – 3.1m Aluminium/Hypalon Highfield with 15HP from Yamaha engine. A good choice, thanks to the advices from Ian and Nick from SY Silhouette. We are happy. 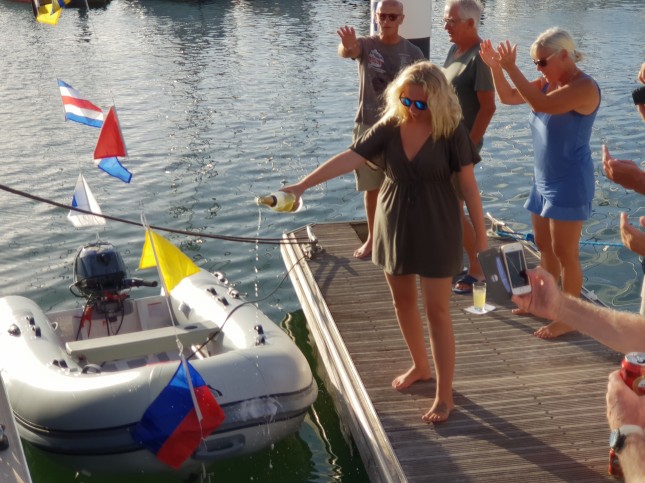 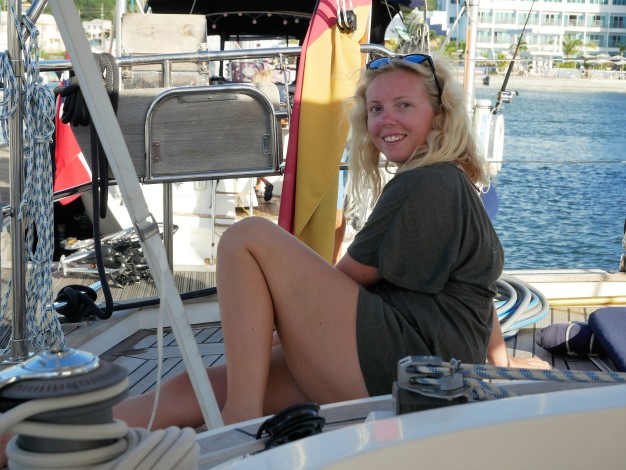 One of the very last boats to arrive in the middle of the night was SY Orion with Karl and Peter, a robust aluminium hull 40 feet Allures. Her propeller was blocked and they could not use to engine. Now an engine is of course a prerequisite to enter a harbour especially if the entry is a narrow as in Rodney Bay Marina. 3 other crews from UK and we (sitting together over gin tonic and whiskey, because there were no more rum punches availble that night….) listened to the VHF radio traffic between ARC Control and Orion.

“They do not progress. Too much bla bla bla,” we thought…. Karl and Peter must be super tired ….. Orion tacking on the finishing line trying to reach the marina…..ARC wanted to send them a water taxi to bring them in…. for 150 US$…. Karl seemed tired on the radio… it was bumpy out there at the finishing line ….. little winds right from the shore on the nose of Orion which had to tack to come closer to the marina.

Ok guys, we will bring Orion in and not let them hang out there. Our dinghies are strong enough. A clear decision amongst all of us. Time for action. In our past lives we were all not made to just let things happen. Steve from SY Allegrini with his dominant voice takes the VHF Mic and communicates with ARC on their working channel 77 (text here a bit shortened):

ARC Control this Allegrini. Do you read me?

ARC control: We read you. How can we help?

Allegrini: We have followed your communication with SY Orion and are concerned with the development. We will bring Orion in with 2 dinghies. Seems there is an issue which is difficult to resolve. Please stay away from further actions. Allegrini, Sílhouette, Ithaka and Right Turns will take over.

… some arguments backward and forward..

Allegrini: We will bring Orion to the berth next to us on the hammer head of our pontoon.

ARC Control: Negative. This berth is planned to be for a catamaran to arrive tomorrow.

Allegrini: Then we will berth Orion there until this catamaran arrives tomorrow.

ARC Control: Seems that we have little say in this.

Allegrini to Orion: Karl, we will bring you in. Have lines ready for 2 tug boats. VHF channel 77 is our working channel. Silence for all others on the channel until operation will be completed.

Ian and Nick bring the dinghy “Pegasus” to water, our dinghy “Odysseus” with is already waiting. For everybody life vest, torch head light, mobile VHF, emergency knife on the belt. 2 men in each dinghy. Ian and I would master each of our dinghies as tug boats left and right from Orion, Nick to go on board SY Orion and take control of the vessel for the operation, Steve to manage communication being on board of my dinghy.

Odysseus prepared by me

Pegasus being prepared by Ian from SY Silhouette

It was bumpy outside, really wet and a bit tougher than we thought. Orion moved heavily in the sea.  At first she kicked furiously on us from left to right like a horse not willing to accept control from our tug lines. Eventually we brought Orion successfully in to her berth after a while. At 2 am the entire pontoon welcomed with their ship horns and whistles SY Orion after being 17 days (!) out there.

We were back in life with this exercise! Forget the Atlantic crossing. This was great fun and an amazing team work. We could feel ourselves first timed after endless days and nights on our rolling yachts,  after days of seasickness and so many rum punches since our arrival. Very good for all of us. Team work, full action in water, all muscles and full brain was required. A mental reset. Excellent!

Orion has arrived, tugged in the last mile by tenders Pegasus and Odysseus

Next to the story of Orion there were stories of incidents such as but not limited to: 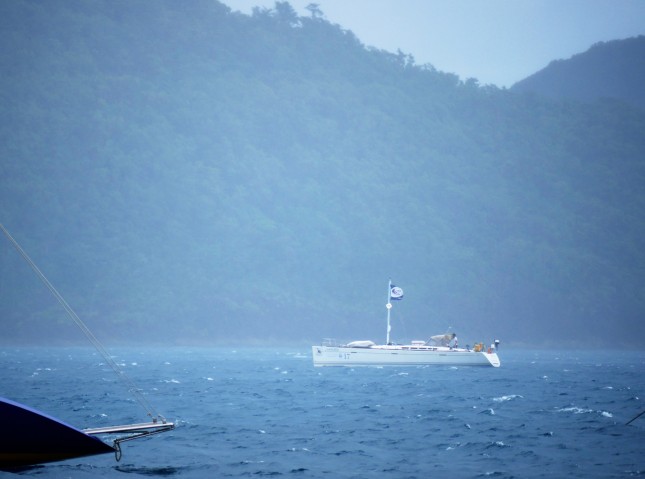 Not everybody managed the passage easily – Dismasted

The most exciting story is from SY Salty Dog, winner of Leg 1: At Leg 2 they had to cut their spinnaker in 2 parts in the middle of the night, as it had wrapped around the front stay in a bad squall and could not be rescued otherwise. One person had to climb in the mast, to get down the rest of the sail and halyard. But then they rigged a reserve spinnaker and continued their journey at full speed. They sailed like hell not taking into account the material. It was their deliberate strategy. Different from our strategy…

Rodney Bay in St.Lucia – Time to sleep and review – Wonderful 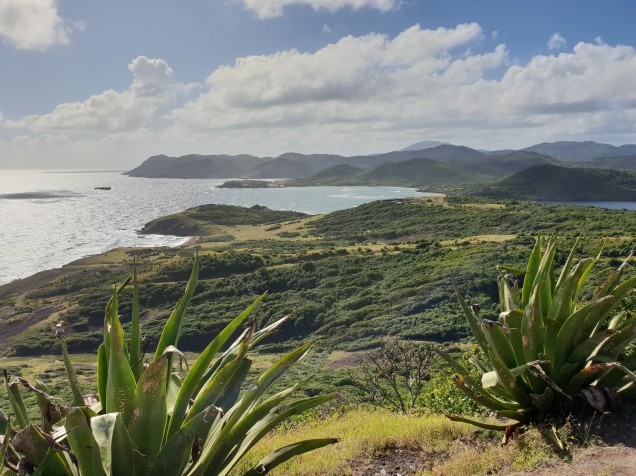 We reflected all these stories and especially also the emotions behind each of these stories (and there were many) and started to check and balance our own passage. Rum punches and lots of sleep also helped to reboot our brain. Hence after 3 weeks in Rodney Bay in St.Lucia we concluded as follows:

Some learnings for us: 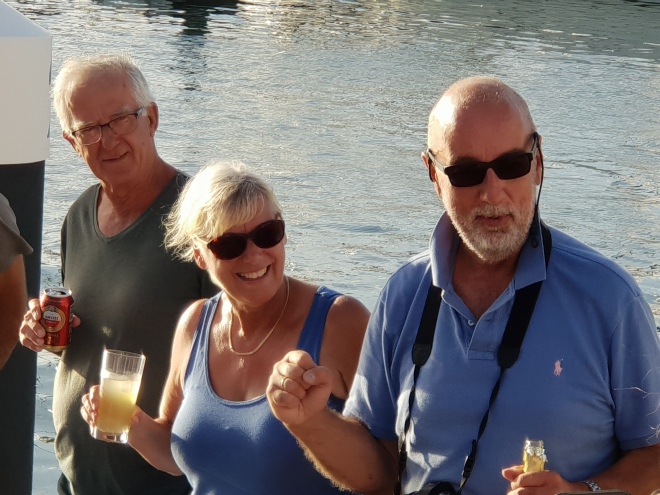 Back in life. Memory was rebooted after our debriefing. Rum punches helped a lot.

One of the key questions readers and followers raised, same as the entire ARC+ fleet, was why we deviated so much to the South accepting an increased distance of far over 200nm and did not chose the shortest distance as the rest of the fleet. We almost went to 11 degrees latitude which means we went quite far in the tropical convergent weather zones close to the equator with the high risk of very unstable winds and many squalls.

It was a deliberate strategy to go South consisting of 4 elements when we look on the overall weather chart:

Details of the weather map prior to our start in Mindelo / Cape Verdes below:

The weather development in the tropical Atlantic and our choice for the passage planning.

Did our strategy work? …. Yes and No:

As expected, we had the most steady winds with around 18 knots whereas the fleet had lighter winds in the middle of the passage and much more confusing seas than what we experienced. This also resulted in the fact that we could reduce sails at night, which makes it easier for one person to handle changes of sails in case of need, but still maintain good speed well above 6 knots.

For sure our course was much better for the material. Changing loads on the boat and the rig as well as subsequent chaffing of lines is a significant risk. Failures can be forecasted with a very high likelihood.

However, the expected much lower winds in the North route did only happen partially. Hence the fleet could also sail with reasonable good winds and use light wind sails such as Parasailor.

Now we crossed the finishing line as 31 of 72, which is good for us. The corrected time calculations were a bit strange for us. Actually, I have not yet been able find out with which rating we ended.

The winner in our class, SY Gertha 5, came to a surprise for the entire fleet. No doubt that this had to be Salty Dog, same as on Leg 1,  being 2 days ahead of everybody. Nobody was able to explain this. For us no problem as we were not ambitious to get any price. Just arrive safely somehow in time was our sole ambition, which we could fulfill.

ARC+ is over now. We have cleaned everything, continue to recover and just enjoy the place where we are. We have progressed to Martinique meanwhile. In case you would like to continue to follow us YP Races App does not work anymore. You would need to use Marine Traffic App and select the right Ithaka as boat.

Angela reviews the passage emotionally only now as the ARC event is over. She benefits that we are alone on anchor. But we are not really alone, as we sail in company with Silhouette and Festina Lente and plan for a joint Christmas.  She relaxes, sleeps a lot, eats carefully and makes selected, longer calls with family and friends. Brave and robust as always in the middle of a fire, but the efforts have taken their toll also from her which becomes apparent now. What would I have done without her?

.. and can watch local boats on a Sunday race

I have recovered from the seasickness almost 95%. Some traces are left: I am still totally “allergic” against selected smells and tastes. I hope it will disappear over time, but at the moment it is stamped in my brain. Perhaps I should have more Rum punches and reboot my memory once more. “Reboot tut immer gut”, as we said in SAP.

Our Christmas tree in a glass

Angela and I wish all of you a merry Christmas and a happy new year.