Guiding principles for our journey:
Our circumnavigation will follow in large parts the trade wind areas in the northern and southern equatorial zones. The route is known as the classical „barefeet route“ or better in German „Barfußroute“. For the passage across the Atlantic we will follow a very simple principle: „We sail South until it will get hot and the butter melts. Then we turn right 90 degrees and keep going straight on until we hit some islands“

Overall we try to benefit from regular trade winds which push us West around the globe, but we need to avoid tropical storm times and zones such as in the Caribbean Sea in the summer months.

So our travel time and passage is very much governed by exploiting the best times for the trade winds and making stop overs during tropical storm times (which do take some months). Also of course we would like to see specific areas which will take time to get to know them more in detail.

We both always have a plan, however, we tend to see our plans rather as a tentative guidance. This is one of our strong common denominators. So far, we have made significant changes, in vital agreement,  because we needed to change and adapt as we had learnt better and changed our mind to what is important and good for us. So in short, you may see variations to this passage plan. 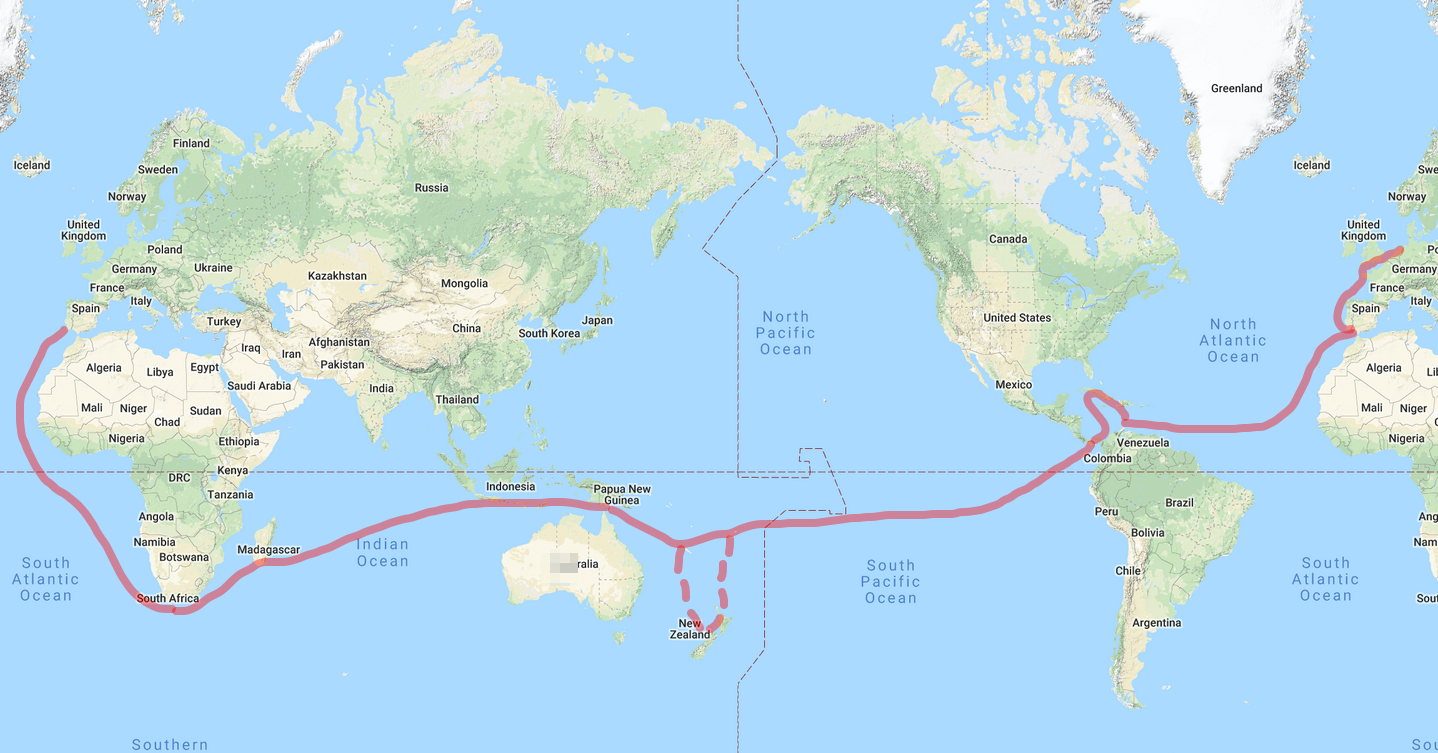 2017 Start in Medemblik / Netherlands and first major stop in Lagos/Portugal:
The journey started in Medemblik/Netherlands rather rapidly early 2017 (some called it an escape) and we brought the boat to Brest/France. Going down to Spain over the Bay of Biscay and later on along the Coast of Portugal to Lagos in the South of Portugal.

Final preparations for the Atlantic Crossing take place in Lagos Portugal.  The boat is with the shipyard SOPROMAR while we have to return home to finalize both our jobs.

2018 Atlantic crossing starting in Gran Canaria via Cape Verdes Islands to St.Lucia:
Upon return we sail to Gran Canaria – Las Palmas where we meet the ARC+ fleet with 72 boats who will start the Atlantic Crossing as a Rallye via Cap Verde Island. It takes us 1 week from Gran Canaria to Cap Verdes / Mindelo and 13.5 days from there to St. Lucia in the Caribic.

Year 2019 in the Windward Island:
After having arrived in St. Lucia in December 2018 we explore the Carribean Islands St. Lucia, Martinique and Grenandines such as Tobago Keys, Mayreau, Union Island. Family issues cause a stop and we have to return to Germany early February 2019 while leaving the boat in Martinique.

May 2019 – We return from Germany where Angela had to spend long weeks in hospitals. After her surgeries we have to test whether she is still able to sail or not. Very cautiously we hop from island to island and arrive in Greneda where we leave the boat for the summer 2019.

Season till October 2019:
The summer 2019 is rather hot in Grenada. 2 tropical storm which develop later on in hurricans pass by Grenada.